Boys Love Their Skin Too

Boys Love Their Skin Too

It’s no secret. Good skin care is important to most women. We buy creams to keep it smooth and we buy makeup to make it prettier. Either that, or we’re covering up blemishes. And over the past couple of months, I’ve been increasing my knowledge about the various skin treatments that exist, knowing that some of them have come in very handy for a few of my female loved ones. 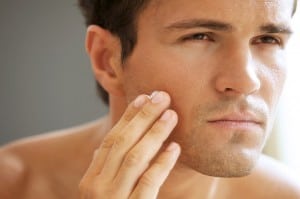 So I figured blogging about these treatments would be of great use to the rest of you ladies out there. Or so I thought. Oh, don’t get me wrong. I know many women who have become quite interested in what I’ve had to say. But I guess I never assumed my new-found knowledge would mean much to Charlie.

I went to school with Charlie. He’s awesome, a super funny guy with intelligence to match. We don’t see each other much but still keep in touch, especially through social networking sites like Facebook. I must say though, I was surprised to hear from Charlie on Facebook this week.

I suppose word got out about my Aunt Candy having undergone BOTOX Cosmetic Treatment and he was curious about it. But why? I couldn’t imagine that Charlie had any wrinkles to worry about. You think I should “learn to love the laser too?” he jokingly asked me.

At least, I thought he was joking. Charlie, I soon found out, has some skin discoloration on parts of his body. I didn’t delve further into finding out where, but he did ask me to delve further into what treatments I’d recommend. “I’m no expert over here!” I had to remind him.

But it did bring to mind another “laser” treatment that I thought may make sense for him. This one is easy to remember too as it’s just three letters: IPL. Standing for “Intense Pulsed Light” (something sounding a bit masculine I suppose, so don’t worry boys!), this laser treatment is a bit different than the others I’ve learned about.

Unlike most other laser treatments that only omit light in one wavelength, IPL provides a spectrum of light that provides more versatility. The various wavelengths heat a targeted body area helping to eliminate problem skin areas. Inevitably, unwanted skin tissue is discarded leaving new and fresher layers of skin behind.

IPL has been known to treat such skin issues as brown spots, I informed Charlie. He seemed pretty encouraged by this news. Average treatments, I continued, are usually between five and fifteen minutes long. “That’s it!” he exclaimed, followed by an all capitals “THANKS!”. That’s the last message I received from him. My guess is Charlie is busy booking an appointment!